After my first experiment, I realized that there were variables that left some questions unanswered. So I did three things differently this time:

After my last experiment I received several suggestions for other green colorants to try: alfalfa, avocado, cucumber juice, chlorophyll, and other powdered botanicals. While I was game to try anything, I left some out because either I couldn’t find them, or because it would have been too difficult to test in such a small quantity, and to compare to the other additives. I really wanted to try avocado purée but there was no way I could have done it on such a small scale and account for the added volume and unknown amount of water.

Here are a few details on each of the additives I ended up choosing. 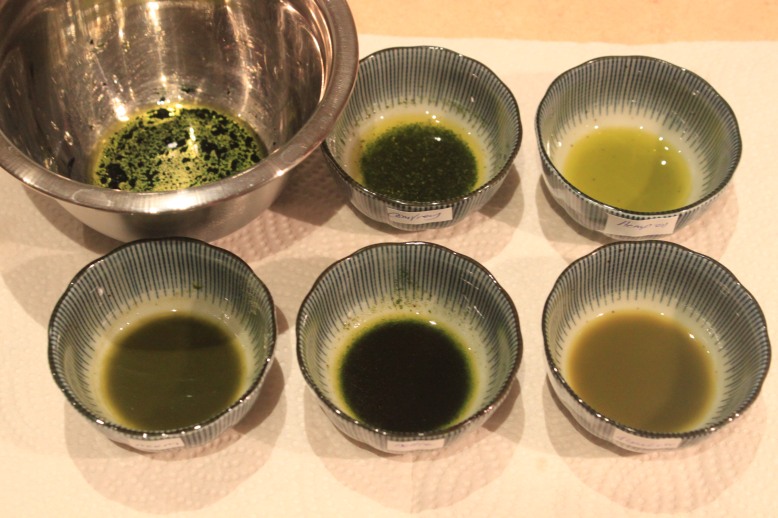 Top to bottom, from left to right:

I started by weighing out the additives at a gram each. I came to this weight by starting at the most common ratio for any colorant, 1tsp / LB of soap, which is about 0.7 grams of botanicals, and then rounding up to 1 gram, my scale’s smallest unit. I added 5 grams of extra virgin olive oil to each colorant, except the hemp oil. I used the hemp oil as a colorant, adding it in at 6 grams, to replace the olive oil and 1 gram of powdered additive.

For the soap recipe, I used the same bastille recipe I had used the first time around, but increased the batch size to account for the control and the oven processed control. The recipe is a basic bastille soap with olive oil, coconut oil and castor oil. Lye concentration at 38%. Superfat at 4%, and with the added 5 grams of oil in each colorant this gets bumped up to a 7% superfat.

I mixed the soap to emulsion them poured out a predetermined amount for each color  and mixed in the green colorants and oil. Then I poured half of the colored batter into a 6 cavity muffin mold – destined for the 170 F oven – and the other half into a crimped cupcake mold destined to sit uncovered in a cool room. The smooth soaps were left in the warmed oven for 4 hours, to try and force gel (although, to be honest, not sure they did gel) and the crimped cupcake soaps were left uncovered on a tray in a cool room. I unmolded two days later, and here are the results!

This time I made more of an effort to take good pictures of the soaps at different times in the cure. Et voilà!

Not bad at the unmold! My biggest surprise was the lack of difference between the oven batch and the room temp batch. The only one that is obviously different is the hemp seed oil, and it seems the cooler the soap, the more obvious the color. I guess it makes sense since it is cold pressed oil, perhaps heating destroys something in it.

Ok now, at two weeks, here also with the control peeking in on the right.

I find that at the two week mark you can really see that the oven processed soaps are yellowing and browning faster. Kind of like leaves in the autumn. 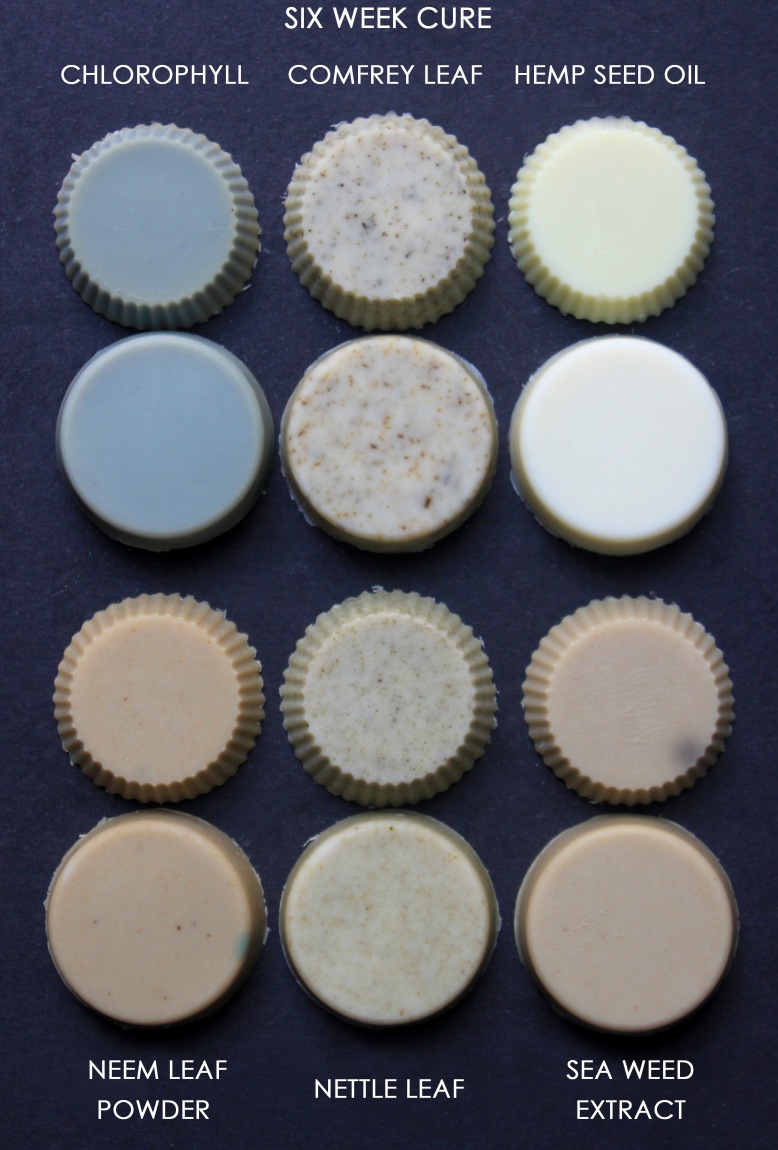 Not bad at full cure. Some blotches (soap from other tests) have appeared on the soaps, and that means I should wipe my spatulas better 😉

Normally, this is where most colorant tests end – at the 6 week cure. At this point most soaps are not only fully saponified but fully cured. If the color stays until the six week mark this is considered a good colorant, and in fact, this is where I was going to publish my results. But as life should have it, that didn’t happen and another 12 weeks passed before I sat down to write this. And I’m glad it happened that way, because here is a pic of the soaps 5 months into the cure… 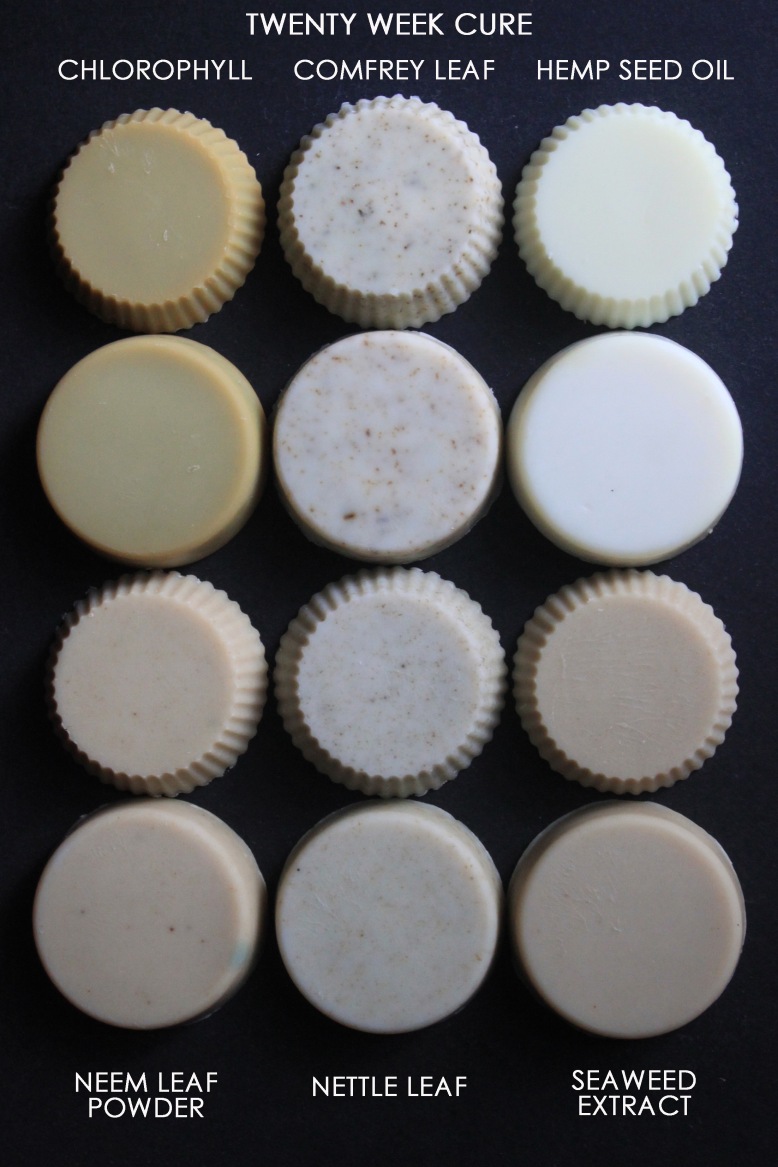 Thoughts on the Results:

My feeling is that natural greens are particularly difficult because as we know, leaves brown easily. They get brown and yellow at the onset of cold weather, when they are picked, when they are cooked or otherwise broken down. And this explains also why the oven processed soaps yellowed faster. From the beginning and throughout the process chlorohyll was the most impressive colorant. It packs a real punch with the clear bright ocean green, but as you can see, it ages the least well. The chlorophyll is extracted so it’s not bound by leafy cell walls, which explains both why it is greener at first and then fades quicker. I also noted that the chlorophyll resembled the spirulina and chlorella I used in my first experiment, and that’s because sea weeds contain high amounts of chlorophyll.

I believe the reason the nettle and comfrey have held up the best is because they were 1) fresher and 2) more intact – ground in a coffee grinder – meaning the chlorophyll is still bound in the cell walls. The more you break botanicals up, the faster the cell walls will break down in a challenging environment: like alkaline soap, a hot stew, an infusion, or a tincture. So, if you can stand the speckled look, grinding your botanicals yourself might be the way to go. Although, these will eventually end up yellowed and faded too. The reason the neem has stayed the same color is probably because it already did its yellowing on the store shelf. When I bought it it was already yellowish brown. But I bet fresh neem leaves are green too.

As for the hemp oil, I really should have used more of it to know for sure. But I do believe that hemp would be no different than any other leafy botanical. Unless the green color comes from something other than chlorophyll.

I started suspecting a while ago that the  botanical colorants that seem to hold true and stay fast, come mostly from roots. Indigo (and I guess woad too) is in a league of its own: even though the colorant comes from the leaf it’s extracted through a process. I have a feeling it’s because chlorophyll is kind of the problem, because its purpose is to be reactive to sunlight.

I now feel that I don’t need to test any more green colorants. But if you have any other ideas for other natural colorants I could try, let me know! And please share any comments, suggestions or questions you might have on the subject. Let me know if you want close ups of the different soaps, I could add those in after if you want. Thank you so much for stopping by 😀

This short video on natural plant dyes explains the difficulty in extracting green from plants (for cloth dyeing). Worth a watch!